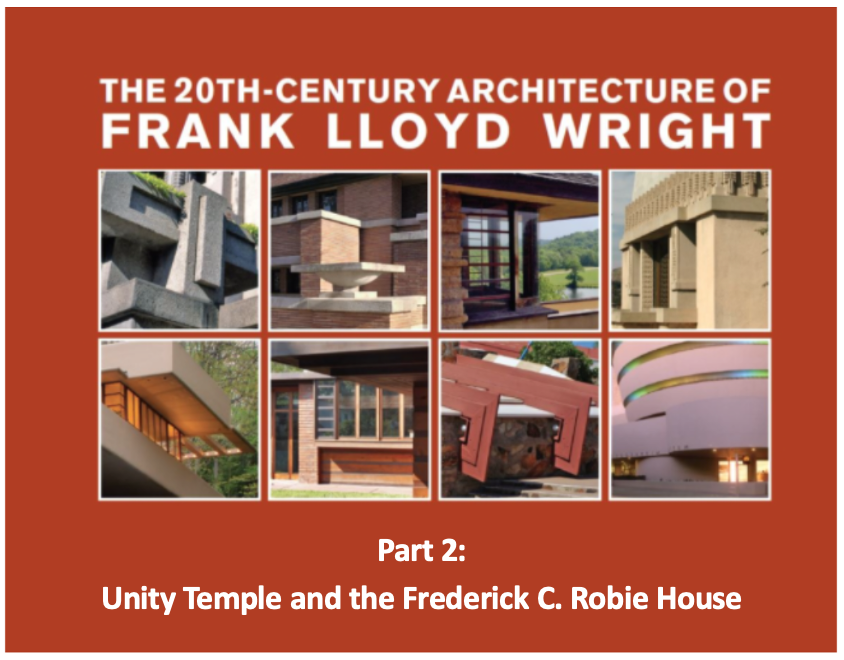 Part Two in a series about “The 20th-Century Architecture of Frank Lloyd Wright” World Heritage listing. (If you missed Part 1, read it here.)

Frank Lloyd Wright spent the first twenty years of his career living and working in Chicago, Illinois, and its fast-growing suburbs. It was here that the architect developed the Prairie Style and began his career-long exploration of new materials, methods and forms.

In our shared effort to celebrate “The 20th-Century Architecture of Frank Lloyd Wright” World Heritage listing and the sites included in it, this month we introduce the two earliest sites, both located in Illinois: Unity Temple in Oak Park, and the Frederick C. Robie House in Chicago.

Read on to learn about why these sites were included in the serial World Heritage listing and how to visit them or participate in their programming.

Completed in 1908 and dedicated by its Unitarian congregation in 1909, Unity Temple is the oldest building included in “The 20th-Century Architecture of Frank Lloyd Wright” World Heritage listing. It is also unique among the sites listed for being a functioning church (as originally intended) for a thriving congregation.

Unity Temple was chosen and designated a World Heritage site for its form and its innovative use of reinforced concrete as primary building material. In its abstract cubic form and progression of spaces, Wright’s structure is one of the first truly modern buildings. It represents a radical break from long standing Western notions of enclosure as well as from conventions of religious architecture. Unity Temple’s radical cubic appearance, derived from the traditional meeting house form, was intended as a manifestation of the denomination’s progressive beliefs. Its form expresses both its monolithic construction and interior functions: the sanctuary at one end, the social room at the other, with a foyer connecting the two. The individual’s experience navigating the space is central to the design.

Wright’s use of monolithic reinforced concrete for a public building, rather than an industrial structure, was groundbreaking. The nature of the concrete material and the qualities it expresses is an early example of béton brut (“raw concrete”), concrete that is left unfinished after being cast, displaying the original wavy patterns imprinted on it by the poured-in-place formwork.

Unity Temple closed to the public in March 2020 and as of 1 September 2021 has yet to reopen for public tours. During the shutdown, Unity Temple Restoration Foundation (UTRF) has engaged audiences with virtual concerts and behind-the-scenes tours. In addition, UTRF’s Executive Director, Heidi Ruehle, has served as one of the co-leaders of Wright Virtual Visits (along with Jeff Goodman of the Frank Lloyd Wright Foundation and Eric Rogers of the Frank Lloyd Wright Building Conservancy), a nationwide campaign including 25 public Wright sites creating live side-by-side videos of paired sites. These visits are available once a month on Facebook and archived at savewright.org/wvv.

On September 25, 2021, UTRF will celebrate Unity Temple’s inclusion in “The 20th Century Architecture of Frank Lloyd Wright” World Heritage listing with a plaque unveiling and speakers including Barbara Gordon of the Frank Lloyd Wright Building Conservancy. Also starting in September, UTRF will once again host onsite programming including the Unity Chamber Music Series, Break::the::Box Lecture Series, and Unity Dance Series. These programs are open to the public and tickets can be purchased at utrf.org.

Completed in 1910 for a businessman with wide-ranging interests in modern technology, the Frederick C. Robie House is the consummate expression of Frank Lloyd Wright’s Prairie style. Recognized by the American Institute of Architects as one of the ten most significant structures of the twentieth century, the Robie House was included in the World Heritage listing as the most innovative and forward thinking of all Wright’s Prairie houses.

The Robie House is conceived as an integral whole. Its elongated structure, unadorned exterior with horizontal spans of casement windows and doors, and open interior plan, all contribute to a singular modern vision. Built when domestic architecture commonly adhered to vertical massing with a fixed hierarchy of spaces, this house perfected a new paradigm for domestic design by allowing interior space to flow from one room into another in a primarily horizontal form. The Robie House set the stage for a new style of American architecture in the 20th century.

Robie House is the first domestic home in American architecture to utilize steel frame construction, allowing for Wright’s expanded use of glass in continuous runs on all sides of the home. No other architect of the modern era transformed the use of leaded glass in architecture as Frank Lloyd Wright, who conceived his windows as an integral part of his organic design. Ninety percent of Robie’s more than 170 leaded glass windows and doors are original, the greatest volume of Wright’s unique glass designs in any of his buildings.

Located on the campus of the University of Chicago, Robie House programs and public tours are offered to both academic audiences and to the public. The Frank Lloyd Wright Trust offers guided and audio tours (available in eight languages) as well as other extended tour options. Learn more and purchase tickets at https://www.flwright.org/tours/robie. Advance purchase of tour tickets is strongly recommended.

The Trust’s nationally recognized educators program, Teaching by Design, continued during the 2020 closure with virtual classes for teachers, online learning resources, and limited capacity private visits to Robie House. Information and lesson plans are available on the Trust’s website and teachingbydesign.org.

A permanent plaque celebrating the Robie House’s inscription as a World Heritage site will be unveiled during this year’s holiday season.