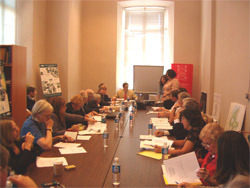 Visit these links for –

Leaders of cultural heritage organizations, representatives of interested Federal agencies, and individual experts concerned about the protection of cultural heritage were convened in Washington, DC, by the United States Committee of the International Council on Monuments and Sites (US/ICOMOS) to begin a re-exploration of ratification of the 1954 Hague Convention for the Protection of Cultural Property in the Event of Armed Conflict by the United States.

As explained by Patty Gerstenblith of DePaul University College of Law, and Dick Jackson of the Department of Defense in their overview presentation of the Convention, its principal applications and the US involvement, the Hague Convention was largely an international initiative that is rooted in American military practices that trace their origins to the Lincoln administration and the earlier Hague Conventions of 1899 and 1907.  After becoming a signatory to the Convention in 1954, the Executive Branch of the United States Government, under the advise of the Department of Defense, never submitted it for ratification to the US Senate for its required 2/3 approval. The objections raised by DoD at the time were based on the perceived inability to meet the Convention’s obligations in the event of nuclear warfare. With the collapse of the Soviet Union and the end of the Cold War, DoD removed its objection to ratification. As a result, in 1999 the Clinton administration transmitted the 1954 Hague Convention and its 1st Protocol to the Senate for ratification.  This constituted the official end of review and actions required from the Executive Branch, and marked the transfer of all remaining responsibility for ratification to the Legislative Branch. Since that time, no action has been taken. The Senate Foreign Relations Committee has never included it in its agenda.

In spite of our failure to ratify the Convention, it was explained that as a matter of course, the United States conducts its military activities and operations in accordance to the spirit of the Convention, as manifested in customary international law based on state practice.

In spite of this stated intention to protect cultural heritage during armed conflict by our military, presentations by John Russell of the Massachusetts College of Art and Cory Wegener of the US Blue Shield Committee provided evidence that recent American military actions in Iraq have fallen short of that goal. The principal reason for this is the severe lack in our military forces of experts on cultural property protection who could provide pertinent advice on – and input into – the planning and implementation of military operations, as well as in their aftermath.  In addition, at least with the case of Iraq, there was insufficient consultation with and support of Iraqi national heritage professionals.

Destruction of heritage sites is never well received by the public, and the international community declares its outrage whenever it occurs. Serious acts of heritage destruction have been labeled as acts against humanity and tried in the international courts.  Our failure to protect cultural property in Iraq has received broad publicity and negatively affected the public perception abroad of both the United States and of our military forces, the latter being painfully aware of these recent shortcomings. This would seem to imply that within some sectors of our military, there is agreement that future military planning and operations must take into consideration the need to protect cultural properties, including an increased the sensitivity on the part of ground personnel to such sites.

Thus, it became clear that in addition to ratification of The Hague Convention as a means to secure a formal legal framework to guide our military, it also behooves the professional cultural property community to gain access to key military planning and decision making bodies where its input would help balance military objectives with the goal of sparing cultural properties from avoidable damage and destruction. Several interventions from attendees indicated that when such services were offered by their organizations in the past to both the Executive Branch in general, and more specifically to our military, they went without any response.

There seemed to emerge consensus among all the representatives from the private cultural institutions and NGOs present at this meeting that ratification of The Hague Convention is a worthwhile goal to pursue, and that simultaneously, parallel and independent actions are needed to secure for the cultural resources community an effective advisory role that will enable it to sensitize and train our military on the identification and protection of material culture at times of armed conflict.

Having agreed on these two tracks as worthy of further exploration, the discussion turned to specific immediate actions needed.

Regarding ratification of the Convention, there was agreement that the Executive Branch’s lack of objection and the extent of its support need to be re-tested. The last review of the Convention by the executive branch occurred at least eight years ago, in1999. It was carried out by a political and professional leadership with a different composition from that which exists now, and since that time, the events of September 11 and the wars in Iraq and Afghanistan have laid out new challenges that need to be weighed in the context of The Hague Convention. Several attendees agreed to perform informal, high-level queries to identify any reservations that may have risen since 1999. The nature of those findings will inform the decision on how to proceed, if at all.

As to securing a permanent advisory role for the cultural resources community, since it was agreed that this action is independent of the ratification issue, it should be pursued at once.  There was recognition that this meeting had brought together groups and organizations that traditionally have not interacted, and in that sense, those at the table constituted the potential establishment of an embryonic new network.

An initial venture showing great promise would be to provide immediate assistance to DoD’s Civil Affairs branch in creating new guides and educational material as well as enhancing existing tools used to train the military personnel in the identification and protection of cultural properties, as well as in instructing them of their responsibilities to do so under international law.

Before adjourning, there was tacit agreement that all organizations and NGO’s present will continue to meet and pursued the two prescribed lines of action. There was also agreement on the need to bring in other cultural organizations, and to educate their Boards and top leadership on all these issues.