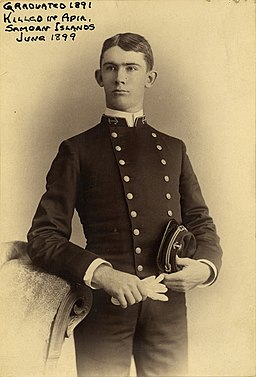 The colonial history of America is not new information to many ears, however Asian-American and Pacific Islander histories are understated and absent from school curricula, and subsequently the American collective consciousness. Therefore in honor of Asian-American and Pacific Islander Month, this blogpost is dedicated to the current activism regarding the controversial statue of John R. Monaghan— a memorialized U.S. Navy Sailor who led a military colonizing expedition in the South Pacific Islands.

Lying at the intersection of Monroe Street and Riverside Avenue in Spokane, Washington, is the bronze statue of John R. Monaghan erected in 1906, accompanied with a plaque illustrating the murder of Monaghan by Indigenous Samoans in Apia, Samoa. Remaining an American territory to this day, American Samoa and the city of Spokane are now interlinked through contested memory. John R. Monaghan was the first person from the state of Washington to graduate from the Naval Academy in 1895. However, to many Samoans and Pacific Islanders he is befittingly seen as an oppressor and dark moment in their history. Non-profit organizations such as the Pacific Islander Community Association of Washington have justifiably expressed their sentiment by petitioning for the removal of the monument in its entirety.

The plaque and bronze statue reflect a sentiment America historically and contemporarily wrestles with: the dehumanizing and forceful primitive lens that Indigenous and Pacific Islander heritage are seen through. This lens and prejudice becomes manifested into the tangible heritage that allowed for the Monaghan statue and plaque to be created in the first place.

This statue— regardless of intention— had garnered a consensus of validly negative reactions from the Samoan and Pacific Islander community. The statue of John R. Monaghan reflects the dichotomy that stains America’s national history, where do we draw the line between remembrance and contempt? Or remembrance and ignorance? How do we address contested memories manifested into tangible heritage? The Monuments Toolkit Project encourages you to follow along to better equip yourselves with the information needed to best interpret and navigate through contested monuments of memory and dissonance.