Alan serves as the Senior Director for Cultural Resources for the National Parks Conservation Association. He serves as NPCA’s resident historian and leads the organization’s work on defense of the National Heritage Area program and the campaign to establish a Julius Rosenwald & Rosenwald Schools national park site. 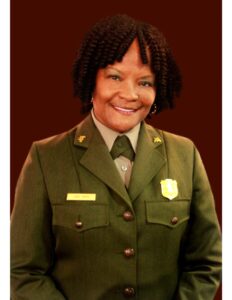 From Civil War to Civil Rights, Ms. Judy Forte has more than 40 years with the National Park Service (NPS) beginning as a Park Ranger at Appomattox Courthouse National Historic Site (Civil War) to her current position as Superintendent of Martin Luther King, Jr., National Historical Park (Civil Rights) in Atlanta, Ga. Ms. Forte also served as the Acting Associate Regional Director of Park Operation where she was responsible for 64 regional national park operations. As Superintendent of Martin Luther King, Jr., NHP, she is responsible for directing park operations and mentoring local students. She earned a Bachelor of Science from Tuskegee University; and is a Fellows graduate of Harvard University. She has received numerous awards for her leadership and dedicated service. She also received Special Recognition for outstanding and invaluable service to the community by Congressman John Lewis.

Martin Luther King Jr. National Historical Park
Because Dr. King remains of one the most influential Americans of the 20th century, upwards of a million domestic and international visitors a year make the pilgrimage to Atlanta and tour the Martin Luther King, Jr. National Historical Park, a unit of the National Park Service. Its stated mission is to preserve, protect and interpret the places where Dr. King was born, where he lived, worked and worshiped, and where he is buried. The National Park Service conducts tours of the Birth Home on a first-come basis scheduled in person on the day of the tour. The historic church is open to the public. 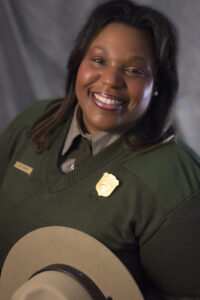 Kinard holds a bachelor’s degree in social work and sociology from Livingstone College and a Master of Arts degree in history and Ph.D. in U.S. history with a minor in public history and Caribbean studies from Howard University. She has studied race relations abroad in Canada, England and France. Kinard’s 20-year NPS career reflects an abiding interest in the preservation and advancement of stories pertinent to African American and American heritage. She is the Superintendent of the Central Alabama Civil Rights Sites which include the Tuskegee Airmen National Historic Site, the Tuskegee Institute National Historic Site, and the Selma to Montgomery National Historic Trail. Kinard has held multiple leadership roles, including her recent 5-year tenure as the first superintendent of the Charles Young Buffalo Soldiers National Monument; 4 years as National Capital Parks-East District Manager, where she managed the Bethune and Woodson homes, Capitol Hill Parks and the National Archives for Black Women’s History.

From the Margins to the Center: Interpreting Social Justice in Central Alabama’s Historic Civil Rights Sites of Consciousness as Places of Healing
From tragic beginnings to achievements that changed the world, from the evil of a slave ship to the beauty of a poem, the epic story of African Americans is embodied in hundreds of cultural institutions, museums, historic sites and places of memory. Through artifacts as objects of power, we have seen the lives of a far different America that is being re-examined through the lenses of a different generation. This presentation will discuss the establishment and relevancy of parks in Central Alabama and their current success in executing relationship building in multi-generational communities to tell stories that embody social justice and create healing in Tuskegee, Selma, and Montgomery, Alabama. 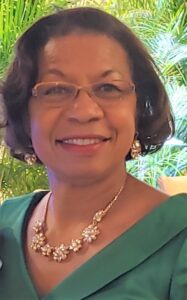 Sylvia Cyrus began her tenure as the executive director of the Association for the Study of African American Life and History (ASALH) in 2003. Under her tenure as the 2nd longest-serving Executive Director, Sylvia Cyrus leads ASALH whose mission is to promote research, preserve, interpret, and disseminate information about black life, history, and culture. Working with an organization with a national profile, she uses this platform fearlessly on behalf of ASALH. She has expanded ASALH’s community partnerships with established and emerging organizations. These strategic partnerships, including the National Park Service, have heightened the awareness and role of preservation of black history. Guided by the vision of its founder Carter G. Woodson, the Father of Black History, Sylvia is honored to lead a 105-year old organization that continues to lead the vital discussion, dissemination, and preservation of Black history and culture.

Interpretation of Civil Rights Sites
How the Association for the Study of African American Life and History supports, promotes, and develops scholarship interpreting the civil rights movement.