Eight vast 2,000-year-old American Indian earthworks in the middle Ohio River Valley constitute the Hopewell Ceremonial Earthworks World Heritage nomination. Conceived and designed as ceremonial centers, these immense earthworks are the finest expressions of the cultural flowering and distinctive genius of Indigenous peoples who participated in a social or religious movement that touched much of North America. Learn how two major changes over the past dozen years are transforming understanding and interpretation of these amazing places: first, reconnection of American Indian Tribal nations that were forcibly removed from Ohio in the 19th century, and second, advances in methods of archaeological research and interpretation. Chief Glenna Wallace of the Eastern Shawnee Tribe of Oklahoma, National Park Service staff and Ohio History Connection staff will share how the prospect of World Heritage designation is propelling these changes, which in turn fuel a vision for full collaboration and co-management in the near future.

The webinar will be moderated by Jennifer Aultman, Director of Historic Sites and Museums and World Heritage Project Director, Ohio History Connection. 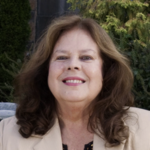 Glenna J. Wallace was first elected Chief of the Eastern Shawnee Tribe in 2006.  She was born in Ottawa County, Oklahoma and has lived within 15 miles of her birthplace her entire life with the exception of 3 years where at a young age she and her family were migrant workers on the west coast moving from town to town, field to field, patch to patch, school to school.  These formative years impacted her greatly, teaching her to set goals, develop a work ethic, accept accountability, be optimistic, and treat each person with dignity.  For 38 ½ years she served as instructor, department chair, division chair, director of travel and interim academic dean at Crowder College, Neosho, MO where she estimates she taught about 25,000 students and traveled to more than 70 countries.  A dedicated community servant, she has willingly served on many committees, boards, made countless presentations and been honored with numerous awards.

In 2006 she was elected Chief of the Eastern Shawnee Tribe, an honor and elected position she continues to hold. During this time thanks to a dedicated Business Committee and committed employees, the tribe has seen the addition of 8 duplexes for elders, completion of 8 new tribal buildings or additions, 2 casinos, road construction, a host of grants funded annually, new programs initiated, and land holdings growing from approximately 400 acres to more than 2500.  Everyone working together in a team approach and shared vision has enabled this progress. 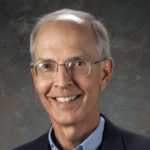 Burt Logan became the Executive Director and CEO of the Ohio History Connection in December of 2009. Established in 1885, the Ohio History Connection is a private, nonprofit organization that serves as the state’s partner in preserving and interpreting Ohio’s history, archaeology, natural history and historic architecture. He oversees more than 200 employees and a $20 million operating budget.

Prior to moving to Columbus, Burt was executive director/president of the U.S.S. Constitution Museum in Boston from 1995 to 2009. He served as the director of the Wisconsin Maritime Museum in Manitowoc, Wisconsin, from 1986 to 1995. He began his museum career as executive director of the Wyoming Historical and Geological Society in Wilkes-Barre, Pennsylvania from 1983 to 1986. 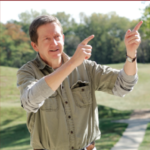 Dr. Brad Lepper earned his B.A. degree from the University of New Mexico and his M.A. and Ph.D. degrees from the Ohio State University. His primary areas of interest include the Ice Age peoples of North America, Ohio’s magnificent American Indian mounds and earthworks, and the history of North American archaeology. Dr. Lepper has written extensively on these subjects for both technical journals and magazines intended for a general audience. He is the author of the book, Ohio Archaeology: an illustrated chronicle of Ohio’s ancient American Indian cultures, published in 2005 by Orange Frazer Press. He also writes a monthly column on archaeology for the Columbus Dispatch. Dr. Lepper also taught in the Department of Sociology and Anthropology at Denison University and the Department of Anthropology at The Ohio State University at Newark. 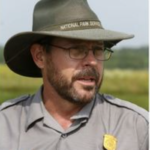 Dr. Bret Ruby has a keen interest in the ancient and modern histories of American Indian peoples. He has directed archeological fieldwork in the North American Midwest, Southwest, and Pacific Northwest for nearly 30 years. His primary research interests focus on Hopewell archeology—the archeology of an American Indian religious movement that swept over the Eastern Woodlands nearly 2000 years ago. He has published widely on community organization, craft production, and inter-regional interaction during the Hopewell period. Most recently, he’s forged an international partnership with the German Archaeological Institute to complete a landscape-scale geomagnetic survey in the park. This research revealed a rich array of previously unknown ceremonial architecture, including several ditched enclosures and monumental timber post circles or “woodhenges.”

Our webinars are free but we would appreciate your support!
Please donate and join US/ICOMOS as a member now.