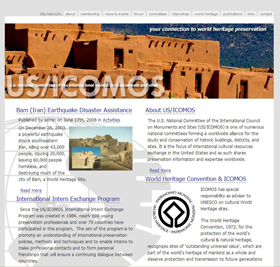 Thanks to the generosity of the National Center for Preservation Technology and Training and the web development skills of Ed “Chops” FitzGerald (former US/ICOMOS Intern to Scotland), US/ICOMOS is on the verge of gaining new interactive web capabilities. The new US/ICOMOS website will represent the first concrete development stemming from the resolutions prepared at the 11th US/ICOMOS International Symposium. While numerous participants recommended US/ICOMOS upgrade its technological capabilities, several former US/ICOMOS interns have been instrumental in contributing to, indeed leading, this effort.

Last year, two former American US/ICOMOS Intern—Meghan Boyce (2006, ICOMOS Secretariat, France) and Suzanne Copping (2006, Ename Center, Belgium)—made a presentation to the US/ICOMOS Board of Trustees calling for and outlining mechanisms for increased participation in US/ICOMOS by young professionals. At the recent symposium in Washington, additional conversations were held with and between other former US/ICOMOS Interns, particularly James Cocks (2007, Old Akko, Israel) and Ed FitzGerald (2007, Scottish Stone Liaison Group, Scotland) during the Thursday evening Young Professionals gathering. By the close of the symposium, a program for creating the new US/ICOMOS website was developed through the generosity and technical capabilities of Ed FitzGerald and Kirk Cordell (NCPTT).

The website will be hosted on an NCPTT server, which will allow for greater flexibility and ability in adding new features. Such features will include online dues payment, online conference registration, and member profiles that members may update themselves. In addition, the website will support a member forum, as well as a forum for each specialized committee, through which US/ICOMOS members can actively participate. The new website, which will be at www.usicomos.org, should be launched in September.

Ed FitzGerald, during his internship with NCPTT summer 2008, is handling most of the design and development. Working with Donald Jones, US/ICOMOS Director of Programs, much of the information from the current website will be transferred to the new domain name, and a membership database and discussions forums will be established. The new and improved US/ICOMOS website will be launched by September 2008.

US/ICOMOS is grateful to Kirk Cordell and NCPTT for their support and cooperation and to Ed FitzGerald, James Cocks, Suzanne Copping, Meghan Boyce and other former US/ ICOMOS interns who are working to increase participation by Young Professionals.