Saidee Newell to be honored at New Orleans Symposium 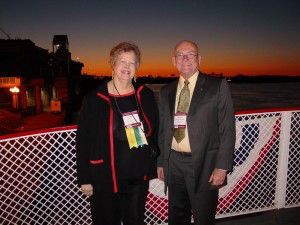 US/ICOMOS will honor the memory of its former Board Member and distinguished Fellow Saidee Watson Newell by naming the first public lecture of the “US/ICOMOS International Preservation Lecture Series” in her honor. This event will take place during the 12th Annual International Symposium in New Orleans on March 12 at 6:30 in the Queen Anne Ballroom in the historic Hotel Monteleone.

According to John Fowler, Executive Director of the Advisory Council on Historic Preservation and President of US/ICOMOS, “Saidee earned her title of World Citizen by working globally to help all who seek to preserve their cultural heritage.” Citizens of Natchitoches will remember Saidee for her determination, energy and Magnolia scented pressure to make Natchitoches the site of the 9th Annual International Symposium of US/ICOMOS held at the National Center for Preservation Technology and Training (NCPTT) on the campus of Northwestern Louisiana State University.This cultural landscape- oriented symposium resulted in the “Declaration of Natchitoches,” an internationally recognized convention that forged new ground in cultural landscapes.

Saidee was an ardent and generous supporter of the heritage of all cultures, beginning with her beloved Natchitoches and expanding outward to all of Louisiana, the United States and the World. It was because of her extraordinary work in US/ICOMOS that she was honored posthumously in 2008 as Fellow of US/ICOMOS at the annual international symposium of US/ICOMOS held at the National Geographic Society in Washington, DC.

Since the US/ICOMOS International Symposium will be held in New Orleans this year “it is most appropriate that the organization honor Saidee in her native Louisiana,” said Natchitoches native Roy Eugene Graham FAIA, Director of the Center for World Heritage Research and Stewardship of the University of Florida,“and if it had been up to her, Natchitoches would be a World Heritage Site.” The central area of Natchitoches is a National Historic Landmark. The Center in Florida has pledged support for this lecture.

Friends, colleagues or acquaintances of Saidee, who may be interested in attending and contributing to this event, please send their contact information to Roy Graham atregraham@ufl.edu.