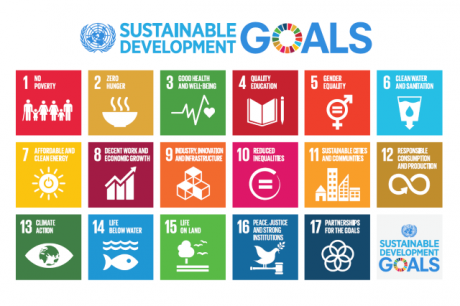 The Sustainable Development Goals were adopted during the UN summit for the adoption of the post-2015 development agenda in New York on 25 September 2015.

Goal 11 is one of 17 new SDGs and focuses on cities and the role of heritage in making them sustainable.

On 25 September, the countries of the world took a bold step towards charting a just, transparent and equitable future for our planet. Amidst much history that was made, not to be overlooked is the unprecedented, explicit recognition given to the fundamental role that heritage and culture play in human development.  ICOMOS applauds this important action and pledges the full support of the cultural heritage community to realizing the potential of this landmark international agenda for guiding global action from 2015 to 2030.

After more than two years of dialogue and negotiations, the UN Sustainable Development Goals (SDGs) adopted by world leaders on 25 September are the most ambitious and holistic development framework ever conceived. That the countries of the world unanimously agreed on a system that is financially demanding, politically difficult and technically complex is best explained by the urgency of the issues the world is facing. Rapid urbanization, globalization and the attendant loss of human identity; excessive and insensitive development; and increasing risks of disasters and conflict, including climate change impacts, present grave threats to the well-being of communities and the health of the environment.

“The new SDGs reflect a hard-learned global realization that heritage is a necessary enabler and a powerful driver of sustainable development,” said Gustavo Araoz, President of ICOMOS. “After decades of pursuing ruinous alternatives to true sustainability, the 2030 Agenda adopted on 25 September is about nothing less than our planet’s survival. It aims to fundamentally change how people interact with their landscapes and its promise cannot be realized soon enough,” he added.

The agreement – Transforming our World: The 2030 Agenda for Sustainable Development – recognizes that we now live in what has been termed the urban century, one in which the sustainability and resilience of cities and towns will be key. Within this framework, the Agenda acknowledges what the members of ICOMOS’s international network of experts have long understood: cultural heritage and urban sustainability are inseparable.

As a crucible of creativity, our shared inheritance of heritage is a driver of inclusive economic development and provides universal opportunities for employment that help in poverty alleviation. Cultural heritage of cities builds sense-of-belonging and of identity, and unites people in a participatory process that promotes social cohesion, inclusion and equity. With their mixed uses, human scale, density and vibrancy, historic cities and settlements are a proven reference model of resiliency, including for sustainable new development.

Unlike their predecessors, the Millennium Development Goals (MDGs), which were silent on cultural heritage, the SDGs speak boldly. Of the 7 targets making up the groundbreaking new Urban Goal, Target 11.4 calls for “making cities and human settlements inclusive, safe, resilient and sustainable by strengthening efforts to protect and safeguard the world’s cultural and natural heritage.” In another break from the MDGs, the SDGs apply to North and South alike.  “The global South, as much as the global North, is rich in heritage, both tangible and intangible, making the Heritage Target a key bridge for realizing the SDG’s aspiration of universal application, particularly in the urban areas” said Dr. Jyoti Hosagrahar of ICOMOS India.

As with the World Heritage Convention, the new SDG Target 11.4 links together cultural and natural heritage. Said Finland’s Kirsti Kovanen, Secretary-General of ICOMOS “there is a growing body of experience demonstrating that, in many landscapes, natural and cultural heritage are inextricably bound together and that conservation of these places depends upon better integration, so the approach of Target 11.4 is incredibly timely.” More urgently than ever, the SDGs demand collaboration among those implementing the World Heritage Convention, the other UNESCO conventions on heritage and diversity and the seven global biodiversity-related conventions.

Few countries have realized Goal 11’s vision of sustainable urban development. The job of pointing the way falls in part to the epic Habitat III convening planned for 2016 and the New Urban Agenda if offers. While there is good alignment between Habitat III and the SDGs, the cross-cutting approach needed to achieve the robust incorporation of heritage into the urban agenda envisioned by the SDGs requires more work. The Heritage Target, 11.4, “cannot be pigeon-holed into just iconic monuments or only one Habitat III theme” said Jeff Soule, ICOMOS Focal Point for the World Urban Campaign. “We need to recognize cultural heritage as essential to sustainable urbanization, integrate it into current planning and development models and advocate more transparent and equitable legal and financial systems.”

To help advance this discussion, ICOMOS is producing a Concept Note on Cultural Heritage and Sustainable Development for the United Nations Post‐2015 Agenda and the Third United Nations Conference on Housing and Sustainable Urban Development (HABITAT III). The Concept Note was reviewed and endorsed by the ICOMOS International Committee on Historic Towns and Villages (CIVVIH) at its annual meeting in Syros, Greece on September 18, 2015. It is expected to be adopted at a special one-day meeting being held in Bangalore, India in November. The Concept Note builds on prior foundational works including  the ICOMOS Valletta Principles for the Safeguarding and Management of Historic Cities, Towns and Urban Areas;  UNESCO’s Hangzhou Declaration on “Placing Culture at the Heart of Sustainable Development Policies,” and the ICOMOS Paris Declaration on Heritage as a Driver of Development.

Along with colleagues from #Agenda21Culture, ICOMOS has worked from the beginning to make certain that the SDGs put the planet on the path toward truly sustainable development and embrace culture in the ways that successful implementation demands. The final document is inclusive, but falls short of this full understanding, as the Global Campaign for Culture Joint Communique correctly explains. ICOMOS will collaborate with its partners to expand the role of culture; with leaders to ensure they live up to the commitments they have made; and with governments, the private sector and communities to realize the full promise of the SDGs. The organization of this work will be the topic of a World Cities Day event being held by ICOMOS on October 27 in Fukuoka, hosted by ICOMOS Japan.

“The SDGs show that the World has a common vision of sustainability and a shared understanding of the tools – including heritage – that make that vision achievable. Now it’s up to all of us to build and re-build that future together,” Gustavo Araoz, President of ICOMOS, concluded.